As I use a lot of smoke in my commentary vids I get messages and comments asking about using smoke. As it’s something that I’m actually experienced in I thought I’d make a tip video showing the different ways to use smoke.

One of the most frequently asked questions regarding smoke is whether or not it looks thicker to the enemy. Well, on the PS3 at least there is a definite difference between friendly and enemy smoke: 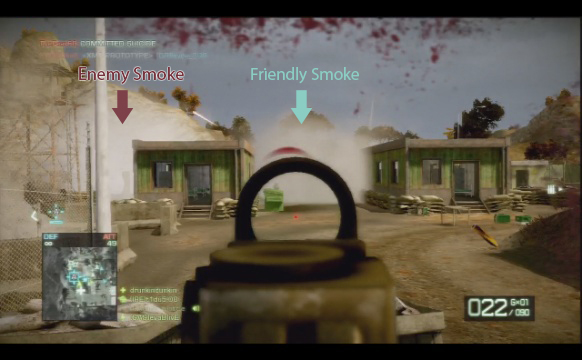 Friendly smoke is greyer and less opaque than enemy smoke. The example I use in the video is the first time that I’ve encountered enemy smoke so although I feel it is an underused asset, it would appear to be rising in popularity.

It’s important to remember that smoke is a support tool. You can’t use it on its own and expect to win a round – you also don’t get any points for using it (unless you kill someone with a direct impact). Think of it as an advantage multiplier. If the enemy can’t see you and are blindly entering an area you have a much better chance of winning the engagement. You can use it at a variety of ranges depending on what you and your team are doing.

On the attack you can use it to cover an advance, to make the defenders look in a direction you are not, and when you get to the MCom station to make it difficult for the defenders to approach the objective. Smoke behaves differently in the open as opposed to inside. Although the duration of the smoke remains the same the density/opaqueness is different (it remains thicker in an enclosed place like real smoke would).

When it comes to defending I tend to use smoke to thwart snipers and slow down the enemy advance. The enemy are less likely to run flat out through a wall of smoke, and snipers cannot spot through it. A nice wall of smoke will therefore protect your team and the objectives for longer than a skirmish line alone. Although it is just a game there is a psychological advantage to using smoke, especially against players who are more interested in whoring their KD than playing as a team.

Although smoke grenade kills are cool I’d suggest not running around with the smoke launcher equipped as a primary weapon. You won’t win many firefights that way. In the videos that I’ve put up where I’ve gotten a smoke grenade kill they are at times when I’ve been smoking an area and an enemy has rushed at me. It’s more effective to pop the grenade round at them and then switch to primary for two reasons: 1 – if it hits them they’re dead and, 2 – if it misses it’ll shroud them in smoke increasing your advantage in the impending fight.

Lastly – countering smoke. If the enemy are using smoke there are two things that you can do: 1 – concentrate fire on the smoked area, especially with grenades and other explosives. Chances are there are enemy close to the smoke (why else would they use it….). At the very least it will make the smoke route undesirable – but don’t forget, the smoke may be a diversion, don’t get fixated on it. 2 – fight smoke with smoke. Unless DICE introduce a massive fan add on or thermal scopes for the weapons you can’t do anything about smoke except wait for it to dissipate. So why let a smoking enemy have it all their own way? Make their smoke unappealing to them by firing your own smoke in to it. If you thought friendly smoke was hard to see through, try a frenemy mix.

So that’s the boring blurb – let’s see it in action:

Find me on PSN – evaDlivE