Yes, the physical proof of ‘Lament for the Living‘ has been despatched and is winging its way to me. It should arrive by the 13th of June.

When I submitted the files the ‘experts’ tweaked the cover art because there were “live elements” that were outside of the trim zone, and the spine was too wide. Which was odd, because in a previous career life I was a printer. That means that I know how to set up artwork, and definitely know how to set up bleed. 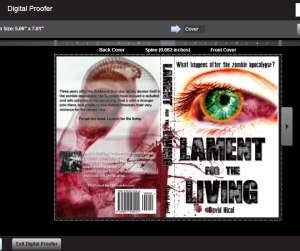 The above is the digital proof and on closer inspection I can see that the eye no longer runs off the side of the cover, there’s a bout 2mm of white space so I’ll have to check what the physical proof looks like (it was fine when the bleed was there….). One thing that I will need to adjust though is that the main title is not centred correctly. That will be corrected prior to publication.

In the meantime, Lament for the Living, Hannibal House, and The Deluge of Elias are all available in ebook formats. For more information go here: http://www.tbfmedia.com/bibliography/

Everything is expensive in the UK, in many cases more expensive than comparative countries abroad. Yes, the price of petrol, diesel and energy prices are a major headache but that’s a post for some other place.

The most frustrating issue is this scenario:

Here in the UK, especially with gaming and technology related items, a lot of our information comes from the US. Many products are not available here that the Americans can pick up in Wal-Mart! When those products are available we see this more often than not:

Okay, so what’s the problem? I hear all you non-conversion calculator types are asking. Well the problem is the conversion, or lack of conversion. Ninety nine dollars and ninety nine cents is not the same as ninety nine pounds and ninety nine pence. In order to get £99.99 the Americans would have to shell out roughly $150 at the current exchange rates (you can check it here). It’s a common trick and one that you see on most items from America.

But let me stop there for a moment and make something clear – this isn’t an American bashing post. I’m not into American bashing, this is about the UK and the twisted logic of pricing (or rather why we are a bunch of suckers who will pay anything for someone to give a crappy deal while telling us how great it is).

Now, the logic behind the price disparity (or unfairness as I like to think of it) is that it costs more to ship the items to the UK, they may not sell as well over here, there’s differences in taxation and costs and what not. They are all really good arguments for why prices would be higher here. But if you actually look in to it a bit further you begin to get the hint of farmyard odours.

If it was actually the case that shipping an item across the world added so much to the price of an item, why are Range Rovers cheaper to buy new in America than here? After all, they are actually built here (at the moment) and then loaded on to a massive ship, chug-chug-chugged across the Atlantic, picked up by a lorry and delivered to the showroom – that all adds up. So surely if I go to the factory here I should be able to get one at a fraction of the cost our American Cousins pay…… or not.

And then we have China – they don’t seem to have a problem shipping container after container of cheap crap all over the world and selling them for pennies…. (pause for the economists to start furiously typing about flooding markets and destabilising supply and demand chains).

This topic has really been brought up by the Annual Budget which was announced yesterday. We are coming out the worst recession since the last one (and this one won’t be as bad as the next one either) – the “No more boom and bust” rhetoric of Gordon Brown bit him on the bum, but that’s a matter for history. I’m all about the future!

So check this link out and watch the video – it’s BBC news coverage of the Budget.

Chancellor Alistair Darling reiterated the government’s commitment to making Britain a digital world leader, with plans for a major broadband roll out.

Whoopee! Except, and without being overly negative, that is NEVER going to happen. Britain is already waaaaaaaaaaaaaaaaaaaay behind many other countries in the world when it comes to broadband and technology. I’m pretty sure that the Government has never heard of South Korea where pretty much everyone has access to eye wateringly fast broadband, and I don’t mean the 20mb that this Government considers to be super fast – I’m talking about 100mb as standard and they pay pennies for it!

But closer to home, other European countries put us to shame. Holland is one example, and I’m pretty sure that Sweden has a really strong broadband infrastructure – both offer reliable fast internet for much less than UK companies charge. With the Internet comes information and the ability to find out what’s going on elsewhere.

What I’ve found is that the UK is severely lacking compared to our counterparts elsewhere in terms of technology adoption, investment and use – and I’m pretty sure that the consumers are not responsible for that state of affairs. As consumers we are limited to what we are offered.

Find me on PSN – evaDlivE